The “Smarty Ring”: Updates Straight to Your Finger 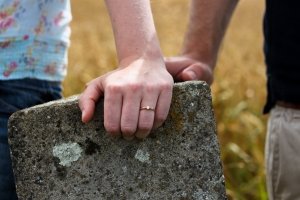 The Smarty Ring claims that a smartphone owner checks their phone upwards of 150 times a day – and then claims it can cut this number down significantly.

The Smarty Ring is a wearable gadget that hooks into your phone via Bluetooth and allows users to check any alerts or calls that come into the phone. You can even check the time in five different time zones, decline calls, and text your best friend.

The Smarty Ring does take a bit of front-end work, and will need to be set up via a mobile app that’s installed on your phone. Once everything’s set up, however, the Smarty Ring can do its job. While managing your alerts from texts to calls is pretty neat, the ring is capable of even more. For example, if you walk more than 30 feet from your phone, your ring begins to beep to let you know you’ve left an important electronic device behind. In addition, if the phone is lost or stolen, the ring can stay connected and track it down for you.

With regular usage, the ring – that only comes in a neutral stainless-steel at the moment – lasts about 24 hours before it needs a charge. It also doesn’t have any device it favors, although it isn’t quite Windows phone compatible just yet. Android and iOS are both supported, however, as long as they have Bluetooth 4.0 technology up and running.

Worried about your dog getting away? The Smarty Ring is also equipped to attach “trackers” to objects, pets, and even people. The tracker is usually in the shape of a ring and can be attached to a necklace or, of course, to a finger in the case of a child. While the tracker doesn’t have any clock, remote or notification features, it’s excellent if something is lost and you need to find it.