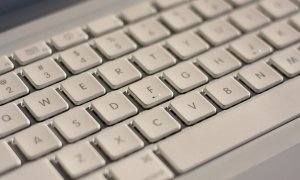 Those of us who type a lot know how uncomfortable a traditional keyboard can get. Many of us are always on the search for a new keyboard to suit our wrists better so we can type for long periods without discomfort. Microsoft has recently come out with a new keyboard called the Sculpt Comfort Keyboard that aims to accomplish this goal for a reasonable price. Read on and see if you might be interested in the features it has to offer.

About the New Keyboard

The Sculpt Comfort has been described as the “La-Z-Boy” of PC Keyboards. It’s Microsoft’s first release of a full-size keyboard in the last two years since they have been focusing on tablet-focused devices instead, so it’s no surprise that the design is fairly original, including Windows 8-specific keys. Some reviewers complain that the spacebar is simply too large, but Microsoft has an answer for this complaint. They say that the vast majority of typists use their right thumb only on spacebars, which leaves a ton of unused space that can be utilized for another useful function. Since the backspace is literally the third most pressed key on most keyboards, Microsoft decided to use the extra space wisely, and split the spacebar into two parts. The Sculpt Comfort has an option to turn the left spacebar key into a “delete” button instead of a space. The idea is that you won’t have to move your wrists at all to correct a mistake made on the screen, and is a useful application of the extra space.

The keys are absolutely huge so your fingers will have trouble missing the right key, and a padded wrist rest gives you 2.5 inches of comforting space to put your hands while typing. If you don’t like wrist rests, no problem; you can simply remove it. The key action has a “reduced sound and push quality” to make typing a soft, soundless activity.

Overall, the keyboard, though on the pricier side, is a good ergonomic alternative to many other keyboards on the market.