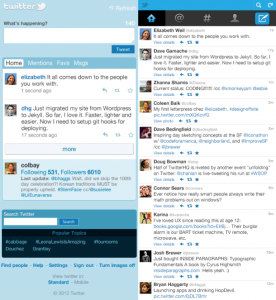 The project of revamping Twitter for mobile Web took hundreds of days of long work and longer nights. However, Twitter is proud to announce that they have finally completed the undertaking of overhauling their mobile site.

Why overhaul something when it’s not broken? Twitter wants their mobile site to be usable by anyone who has a cell phone, regardless if it’s smart or feature. Now people who can’t access mobile Web because they live in rural places with limited internet connection, or those who have low-bandwidth networks, can use Twitter without any extra effort.

Twitter has already been used to spread the word of events, like the well-known Arab Spring. Now, with these new features, information on large events and projects will be even easier to get. Twitter employee Coleen Baik wrote this in Twitter’s blog today:

“Twitter is all about making real-time information available to everyone, everywhere. In order to reach every person on the planet we recently released an update to mobile.twitter.com for feature phones and older browsers. We completely overhauled this client from the ground up, a process that resulted in a lighter-weight, faster client that looks and feels like twitter.com and our mobile apps. The app was overdue for an update on many fronts and we took the opportunity to refresh it inside and out.”

Twitter almost completely abandoned their previous version of mobile Twitter. The company redesigned, prototyped, developed, tested and calibrated their new mobile design site from only bits and pieces of the previous version’s coding. The interface is still modern Twitter’s design and layout, but it can now be accessed with ease from any device.

The beta version of the new system was launched in May, and Twitter reported that it was exceedingly successful. They reported that their users enjoyed that pages were 63% smaller and sessions were 37% smaller.