Nexus 7 Tablet: Not a Huge Money Maker for Google 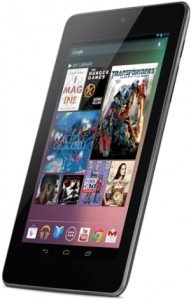 The Nexus 7 tablet is the first tablet that Google is branding by themselves, which has already stirred much interest and curiosity around the globe. Recently, the company announced that they will be starting the price out on these tablets at $199 – cheaper than any other tablet of this size on the market.

Analysts have begun to question how exactly Google can make these tablets at a low enough cost to justify the price tag. Many say that the tablet is meant to bring in customers whilst sacrificing the potential profit margin. However, hardware specialists are telling a slightly different story.

UBM TechInsights came up with an estimate on how much Google’s new tablets cost to manufacture: $184 per device. That covers shipping, assembly, and all components of the tablet. The Kindle Fire, which is priced identically to the Nexus 7, makes $46 a piece on their tablets.

Analysts believe that Google is pricing their tablets so low to take business from Kindle and Nook and to establish a market loyal to the Google brand. The company already plans to bring out more expensive, more powerful devices over the next few years and may be hoping to corner the market.

Since Google is paying more for the hardware of their tablets, they are likely more powerful than the tablets at the same price point. This paves the road to success in the lower-cost tablet market.

The Nexus 7 looks quite impressive on paper. With an increased resolution and a front-facing 1.2 megapixel camera that allows for Skype or Google+ chat, the tablet already blows Fire and Nook out of the water. The tablet will also have quad-core Nvidia Tegra 3 technology and GPS features.

Though this speaks well of Google’s future in the tablet market, iPad still has the higher-end tablet market in the bag. A $499 iPad generates $171 in profit for Apple, and no other company has even come close to the sales that iPad has made.