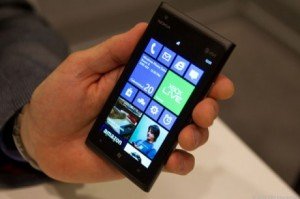 Texting has historically been done with two thumbs, especially since smartphones came onto the market with large screens and no keyboards. However, that may all be about to change: WMPoweruser, a well-known independent Windows Phone community, has come across a picture of a curved keyboard in development that allows for quick typing without moving your thumb from the screen.

The keyboard has allegedly been in design for over a year. The keys are placed in such a way that makes them easily accessible for the thumb, exclusively, to reach all of the keys. If you use any other finger to type, the keyboard can be swapped out for the regular keyboard that most phones have today.

Each button on the screen houses three letters. Microsoft has declined to comment upon the accuracy of the picture in question, nor did they say if the keyboard will be announced along with the anticipated Windows 8 phone design details.

However, back in 2010, Microsoft did suggest at a Windows 7 phone conference that they had plans to “improve the prospect of one-thumb typing,” though they didn’t go into details about what they would be changing. Experts say that their design was not successful at the time, and because the concept failed, it faded out of the limelight for several years.

If the keyboard is successful, then it will likely revolutionize the way people type. The need for pull-out keyboards may also fade away once it is introduced.