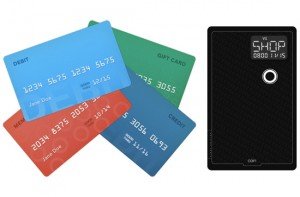 It’s true: carrying around nine different cards for nine different things, including your business account transactions, personal transactions and other transactions can be a drag. If you’re in a hurry, it can even be difficult to remember which card is which (especially if you have them all from the same bank) or which card you need to bring with you to the store on any given day. Coin, a new electronic credit card device, aims to be the one card that rules them all by eliminating all of those cards from your wallet and storing them on a single card instead.

Coin completely eliminates the need to have plastic tie up your pocket space by giving users a digital card that can, theoretically, store up to eight cards at one time (you can store more, but only eight will show up on the Coin itself). By pressing a small button on the Coin, you can switch from card to card within a few seconds, and the digital strip on the back will change accordingly as you change the card selection on the screen on the front. Despite the technology, the card isn’t any thicker than a single debit or credit card you already carry around.

The company launched their pre-order just a few days ago and sold their goal of $50,000 worth of Coin cards in less than an hour. Pre-orders are still open, however, if you have $55 to spare.

The Coin card works by connecting to your iOS or Android device via Bluetooth. Simply download the Coin app, swipe all of your cards into your phone via the app and a standard credit-card reader that comes with the Coin when you purchase it, and then transfer them onto Coin. You can change the cards the Coin stores at any time via your smartphone.

Currently, Coin only works with credit cards (not debit cards) and cannot be used to withdraw money from an ATM, and the lifespan of a single Coin is around two years without any way to recharge the battery. Already there are questions about security, but the company claims that because Coin is digital, you can simply shut it down from your smartphone and deactivate it completely. This eliminates the need to acquire new cards from your institute. Not to mention the card will only work in the US because of the chip-and-pin cards that are being used in every other country.

However, the technology for people in the United States could prove to be invaluable, especially when data security is of the utmost importance. In addition, after a card is scanned into the app, it’s unnecessary to keep the plastic version of the card, making it easier for businesses to allow employees to use company funds for necessities.

While the technology is new and Coin won’t be released until July or August, thousands have already clambered onto the Coin ship and expect to empty their pockets and wallets of plastic for good.