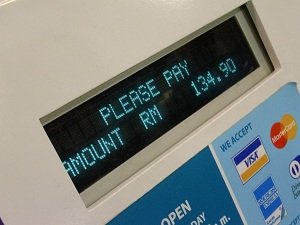 Mobile payment has been called the ‘wave of the future,’ but it looks like it may have a strong competitor coming up on the left.

NFC has been called ‘the great simplifier’ when it comes to paying for store transactions with your bank account. In fact, the least popular use of NFC right now is mobile payments. NFC technology has advanced enough to where a small chip can be placed in just about any product. As long as that chip is present in both products that are trying to communicate, a small amount of data – such as a credit card number – can be transmitted between them. Right now, the technology works for up to an inch away, though that’s mostly for security reasons.

NFC’s use doesn’t stop at paying at the register. You can also buy train tickets, load coupons onto your mobile device, download newsletters and press releases, and more.

The mobile payment method has been incredibly slow to take off, especially since the cost of changing over registers to an NFC-based system is significant, and many companies cannot see the benefit of spending that kind of money just yet.

But at the recent technology fair CES, NFC was featured in absolutely everything. From televisions to cameras, refrigerators, and even business cards, NFC is far from fading out of the market completely simply because it’s not being applied to the mobile payment market. Panasonic has even gone as far as to add it to rice cookers.

Though NFC won’t be replacing Bluetooth or WiFi anytime soon because of how close two objects must be to communicate, it may be carving its own niche that will not be easily taken from it by technology advancements in other fields.

Expect to see this technology cropping up soon in your business cards, TVs, remote controls, wall posters and advertisements, and your cars (to unlock them, of course) sooner than you may think.