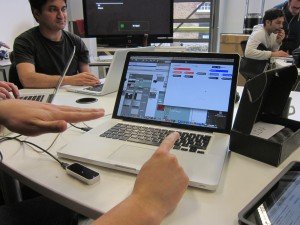 Though Leap Motion, an innovative gesture control system for the computer, doesn’t launch until July 22nd, it’s been all the buzz in the few short weeks since its announcement. Because of this, Leap Motion has decided to launch the developer portal a few weeks ahead of time to give people a taste of what’s to come.

The startup company has decided to allow 10,000 developers early access to their system, all of whom have been itching for an opportunity to build custom applications for the system. However, none of them will be obligated to share their developments with the community.

On the 22nd of July, the first Leap Motion product will ship as a thumb-drive-sized device that simply plugs into a USB port on any computer, regardless of the operating system. Once the drive is plugged in, it’s a simple software install and then the user is ready to control via hand gestures. The technology is much more precise than game system technology, and in lab tests, has an accuracy of a hundredth of a millimeter.

The company plans to have 100+ applications available by the launch of Leap Motion in its personal app store, Airspace. Some of these tools will be available for Windows and some for Mac. Applications are said to benefit aerospace engineers and small business owners alike, however, the technology is meant to benefit everyone. Leap Motion will also be made available in HP and Asus bundles in the coming months.

The Leap Motion system ships for $79. You may view a short video of the technology here.