How To Find Great Summer Employees (or Anytime Employees, Really) 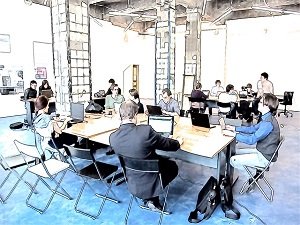 If you need to bulk up your staff during the summer months and are looking for outstanding summer hires, then you’ve got to go where the people who have your desired expertise will be hanging out in significant number. The talent you want isn’t likely to magically show up at a jobs fair, you’ve actually got to go looking for them, and if you’re in any kind of tech oriented business, then finding them can sometimes prove to be a challenge. Below are some off the grid methods of finding the exact talent you’re looking for.

Say what you will about Hipsters. Their taste in clothing might not be up your alley, and they may talk openly and often about a rejection of parts of modern society, but also, having grown up around tech, they’ve probably forgotten more about it than you currently know. It doesn’t matter if you’re looking for someone with a specific skill set, or more of a technological Jack-of-All-Trades, four of the ten Hipsters in that coffee shop you ventured into can probably more than hold their own with you on a conversation about technology, no matter how arcane you try to get. Leave some business cards on the counter and walk away, or have a cup of something and strike up a conversation. You just might be talking to your next new summer hire.

Before School Is Out…

One great way to attract the attention of the kind of talent you’re looking for is to get to know one or more of the professors at the local college or university that teaches a subject critical to your business. Once you do, float the idea of a class project involving a problem you’re working on. You provide the equipment and supplies for the class, they turn your project into something that’s part of their final grade. The advantage here is that not only do you make a powerful ally in your local education community, but also, you get to indirectly observe the process of the class working on the project you established. That means, you get to see who the rising stars of the class are, and tap them for summer work when the term ends. Wins all around.

MakerSpacesYou’ll sometimes also see these referred to as HackerSpaces, but don’t let the name dissuade you from joining these clubs. You’ll find one or more in almost every good sized city, so there’s probably one right under your nose and you just never knew it. The genesis of the MakerSpace is the MIT Class entitled “How to Make Almost Anything.” There’s a two year waiting list to get into the class, but it’s got enthusiasts all around the world. In the class, the instructor outlines how you can network a number of clever devices together with a fairly primitive computer and use these machines collectively to make just about anything you can dream.

The complete list of all the recommended machines is on the MIT website for the class, and you can find open source plans for just about all of it. The Hacker Community has taken the idea and run with it, and you’ll find Fab-Labs (short for Fabrication Laboratories) scattered all across the globe, most of them networked together. These are die hard do-it-yourselfers. They’re clever, creative, and self motivated. Probably, they’re exactly what you’ve been looking for.