Five Signs The Economy Is Ready To Take Off

By Chris ForteApril 25, 2014May 29th, 2021Technology News, Uncategorized
No Comments 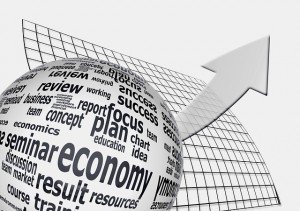 The “Great Recession,” which began in December of 2007, has put the world’s economy on hold for a number of years now, but there are (finally!) some signs that conditions are improving and we’re ready for another round of brisk, long awaited growth. In the United States, here are the specific factors at work that indicate that our economy is once again ready to soar:

1) Consumer Confidence Is Up

There are a number of reasons for this, and one of them is listed just below, as item #2 on our list. For the last several years, Americans have been busily paying down debts and righting their personal financial ships in the face of steep losses and suddenly changing conditions. All that hard work has begun to pay off, and the aggregate impact of the positive adjustments of millions of personal balance sheets has put the country back on firmer financial footing. What happens when Americans achieve a notable milestone? Same thing that happens everywhere else, we celebrate! Except that the celebration will start sooner, rather than later, and will translate into increased spending.

One of the things that has been making people and businesses alike a bit cautious is the uncertainty over the passage of the new healthcare law. Nobody knew what it would do, or if it would even work. Confidence was not bolstered in any way by an incredibly lackluster roll out of the healthcare.gov website, so everyone held their collective breaths to see what would happen.

What happened was problems got fixed, the roll out went forward, and expectations were beaten. By the end of the deadline, healthcare.gov saw nearly a million more sign-ups than they had planned on, and counting the new Medicaid expansion, nearly ten million people who have never had insurance before, now do. Not only has this dispelled much of the uncertainty surrounding the new law, but it has also given the average consumer—who collectively make up the market we all serve—more confidence, especially those who are now covered by insurance. This too, will feed into spending.

The Great Recession was centered firmly on real estate, and as you might suspect, that market lagged considerably behind other indicators. There were millions of foreclosures that flooded the market, and those took time to work off of inventory. Now that inventories are falling, prices have begun to climb. People who were once underwater, aren’t any more. Again, this feeds into the virtuous cycle we’re seeing develop.

Unemployment has always been a lagging indicator, and the delays and sputtering start to this recovery have caused it to lag well behind the other indicators. There’s another factor acting as a headwind, too. The Baby Boomers are now retiring at a rate of about 10k per day. That trend will continue for the next decade or so, and what it has the impact of doing is lowering our “labor force participation rate.” You’ve probably heard about that in the news. What you may not have heard is the Boomer Retirement is the major reason why the participation rate is declining. Nonetheless, the last several months’ worth of jobs data have been solid, and all have been revised upwards. Further signs of our blossoming recovery.

Finally, there’s this piece. For decades, America lost jobs to China and India because of their absolute currency advantage which averaged about 8:1. With that kind of advantage, it just made sense to send jobs overseas.

These days, it no longer makes much sense. Not only has the currency advantage once enjoyed by those nations eroded as their own incomes have risen (now sitting at around 3:1), but also, transportation costs are climbing. Suddenly, it makes a lot of sense to bring those jobs back to the United States, and that is, in fact, what we are beginning to see.