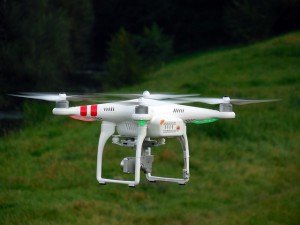 As you may know, drones have gone from having a primarily military application, to being seriously considered as a delivery option by Amazon, to the average person with an interest in flying saucers using them for curiosity purposes. They have taken off (pun intended) and are on course to be a mainstream piece of technology.

For commercial and small aircraft pilots, drones have been seen over college football stadiums and over the skies of luxury homes for the purposes of real estate sales. Like other flying creatures, they are to be avoided by aircraft, as the stories of flocks of migrating birds being sucked into commercial jet engines indicate. There have been less than 100 reports of drone sightings by pilots, but that number has the potential to increase once the FAA establishes guidelines for business and personal use.

The potential proliferation of drones is a commercial airline issue, but businesses have largely had their hands tied in applying the technology, awaiting the Federal guidelines. A license can be obtained by a business to operate a drone, but what exactly what the drone be used for? Forays of exploration into such things as showing high priced real estate and delivering packages have gotten some publicity, but for many small businesses there has to be a definite return on investment for an idea to take flight (sorry).

One truth is that small businesses have had difficulty keeping up with all the advances and changes in technology, particularly when it comes to computers and mobile computing. Many admit they have neither the time nor the resources to keep pace with larger companies in these areas. A question to be asked is, how will drone technology further diminish the ability of small businesses to compete with their larger competitors?

Another truth is, the impact of 1000 or 10,000 drones filling the skies over communities when the regulations are finally drawn up will tax the patience of those in the air and on the ground. One drone was reported to be seen at 1800 feet – about a third of a mile – by a commercial pilot. There may have to be a separate but equally important Drone Traffic Control established by the government to regulate the flight of interstate drones and to integrate its operations with the FAA. That may sound weird, but the idea of drones filling the skies is equally weird for most people.

If there is a case to be made against technology, the drone may be a starting point. It is one of those creations that probably offers more problems than it solves. It may even be said that it is a solution in search of a problem. Small businesses are in business to create a profit and grow their companies, not to compete with every new technology that appears on the market. Being cool and trendy may be an avenue to explore for people who have the time and money to spend, but for most businesses the drone is not an answer. What it has become in its early stages of implementation is a problem that has legislators seeking solutions.