Are You Taking Notes The Right Way? 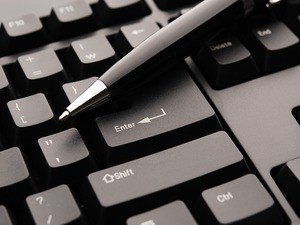 You may be inclined to laugh at the lowly pen being called, in any way, shape, or form a piece of “tech,” but just because it’s been around for a long time now and we’re all quite familiar with it doesn’t make it any less of a groundbreaking innovation. Back in its day, it was positively revolutionary, and for a very long time it was the gold standard where taking down information for later review was concerned.

Then came the personal computer, and not many years behind it, the laptop. Suddenly, the paradigm had shifted. People could type far faster than they could write things out longhand, and suddenly the pen began looking decidedly behind the times.

The debate is more than just hypothetical. The question of whether or not technology should be allowed in schools is ongoing, with both sides being quite passionate about their positions. There are some who claim that while technology has its uses in the classroom, and as anybody who can type at all knows, you can type much faster than you can write. That creates obvious advantages.

On the other hand, having someone sitting right next to you banging away at top speed on the keyboard can be mightily distracting. That’s just as true in the conference room as it is in the classroom.

Recently, a group of researchers conducted some experiments on note taking using the two technologies, pen and keyboard. While some of what they wound was utterly unsurprising, there were a few interesting revelations.

When quantity counts, it shouldn’t surprise anyone that the keyboard wins as the input device, hands down. People who can type a hundred words a minute are lucky if they can manage to write half that, so of course, any time speed matters, the keyboard is going to be your number one pick.

On the other hand, if retention is what you’re after, then nothing beats taking notes by hand. The research shows that retention increases by at least 20% when notes are hand written versus notes taken by a way of a keyboard.

All that to say that while the pen certainly isn’t going the way of the dinosaur anytime soon, it seems clear that at least in certain cases, the keyboard is the new heavyweight champion of note taking. Even so, don’t count the pen out of the running entirely. In certain situations, it will actually serve you better.