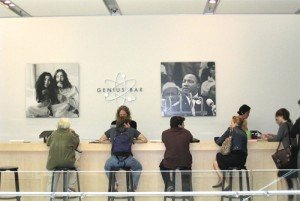 Apple has big plans for their Apple Stores. The company is currently testing a new, sleek design for their Genius Bar helpdesks in several different states. Right now the desk runs parallel to the rear wall in most stores. Apple representatives believe that placing the bar perpendicular to the back wall is a much more customer friendly design that will allow for more efficient service.

In the old design, only one side of the bar can be utilized by customers. With a growing number of Apple clients using the bar not only for a helpdesk but for a hangout joint, Apple thinks it’s time to change its approach. In theory, the new design will double the amount of seating for clients.

The design is currently being tested in ten different stores, with no word as to whether the design will spread elsewhere. It is likely that if the new design is launched, it will be a somewhat limited design because of size constraints in some locations. Still, some experts believe that nearly 90% of the stores will be able to upgrade without sacrificing any other part of the layout.

The Genius Bar is becoming a much more vital tool as Apple continues to grow its line of products. A few months ago, Apple announced that their Genius Bars are to include a wireless data hub that will allow clients to store data on a temporary drive. The hub will be essential to the process of smoothly transitioning to a replacement iDevice. The full-scale launch of the hubs is planned by the middle of 2013.