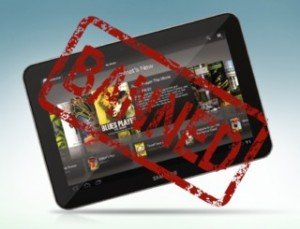 According to Apple, the Samsung Galaxy Tablet infringes upon hundreds of Apple’s patents, and the company is doing everything it can to get the Galaxy Tab banned from the US. In fact, earlier this week, they paid a $2.6 million bond to push the ban on the tablet another step closer to the edge. Lucy Koh, honorable judge of the U.S. District court, awarded Apple an injunction against the Galaxy Tab. The injunction is only preliminary, however, pending more review and Samsung’s counterargument.

The bond that Apple posted is part of a common technique when a company involved in the case is facing an injunction. The bond money will be used to cover financial losses that Samsung may incur while the product is pulled off of shelves and the price of putting it back on if the injunction is overturned for any reason. Sometimes bonds are as little as a few thousand dollars, but in this case, the bond amount is staggering; the amount Samsung is anticipated to lose in profit while the Tab is off the shelves is horrendous.

Apple is entering their third year of struggling to get the Galaxy Tab banned from sale in the US. Apple simply claims that the Samsung tablet has stolen many ideas and concepts from the iPad and has infringed on hundreds of Apple’s patents by doing so. “This kind of blatant copying is wrong,” said an Apple representative late last week.

Samsung immediately responded once Apple posted its bond. The Galaxy Tab producer requested that the injunction remain in a pending state while an appeal is filed. Judge Koh is still awaiting arguments from both sides before she makes a final decision.